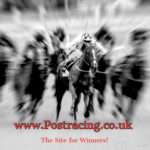 Podcasts
Sunday Series, Baffert, 10/1 banker?, Venetia and nine winners this weekend and, all free to access!

For those hard of hearing please find below the text of my side of this weeks racing chatter, with Sean’s selections added for those races discussed.

No previous running’s of this race, no odds to utilise from a trends point of view, three of the eight horses making racecourse debut, one of which has been introduced as a potential tissue favourite, JARAMILLO @ 6/4 and I feel very much like the blind leading the blind into this one.

The favourite was purchased for 100,000Gns out of Roger Varian’s yard and arrives with a flat rating of 85, which is decent enough and his best flat form figures came over 10 furlongs so he should get two miles over hurdles.

He will not need to be anything Istabraq-like to win this but his worst performances over hurdles came on ground with ease in it, his win was on good to firm.

I’d rather go with KAYFAST WARRIOR if I were betting. A course and distance winner, on soft, which it will be tomorrow and he was only rated 3lb inferior to JARAMILLO on the flat.

This caused much mirth in my office when I saw what Sean had suggested! A Class 6 all weather race, that has never been run before.

What I noticed about these races in midweek, when I was covering all weather racing market movers, was the number of gambles taking place in the 30 minutes before the off time of each race. Some went in, some just failed, and some ran like Class 6 horses, that had not been told they were “off”.

I have nothing other than a gut feeling here.

I’m a big fan of Adam West and he does great with what he has in his yard. Here he saddles GLEN ROSA, who looks to me like a horse they have been plotting up. Since having wind surgery, they have campaigned the horse primarily in Class 6 over trip of up to a mile, no shorter than six furlongs, until last time out when they put him over five furlongs and he ran his best race to date, over course and distance, beaten just half a length @ 14/1

That was his first run in cheekpieces, which are retained tomorrow.

I’m going to put him up as a 20/80 with no confidence in him running two races like that back to back.

Five currently set to go to post but it could be four if RAQISA  Wetherby 12-50pm tomorrow.

Only two winners of this have managed to do so carrying more than 10st 12lb and so if that stat holds firm it’s between FAMILY TIME, MOULINS CLERMONT and MALAKHANA.

I’d rule out RAQISA even if it turns up because I cannot find a debutante that has won this in the last five years.

The last three running’s of this have gone to long odds on favourites and if you sit outside the front three on the tissue, stay at home because nine of the last 10 winners were on the podium.

I’m feeling an urge to go with MOULINS CLERMONT, a beaten favourite running for Gary Moore, whose yard is still running a cracking good 59% RTF%age figure and, he took this last year for the second time in the last nine years. He has actually run seven in this, won with two, placed with one.

This horse was a beaten favourite on debut and as he has been pulled out twice since because of the ground, which was similar to that he got thumped on first time up for Gary Moore, I’m assuming they have waited for the rain, a bit of soft ground, and they have it. His only run in France came on heavy and he was only beaten just over three lengths so let’s put him up another sporting punt….the market will tell us much more on the day.

Just five again heading down the start as I speak and I’d love a tissue to work with as I’d only be interested in the two at the head of the market. They have won eight of the last nine running’s between them, including last years winner who runs again on Saturday, WHITEHOTCHILLIFILI.

The two trainers you would most be looking for here are Nicholls and Henderson, who have won five of those nine races but neither is represented here so my eye is now drawn to GAULOISE, who is trained by Willie Mullins.

He won this race with LAURINA in 2019, and her only run to date over this trip saw her beaten ½ a length by SKYACE, who travels over from Ireland for this race, too.

My selection will be GAULOISE, simply because she is unbeaten in three races on soft ground, which she has on Saturday….again, as I speak (might be frozen solid on the day!), and having seen him winning last week with STORMY IRELAND you know he’s not sending horses here just for the fun of it, especially with the additional expenses now applied to doing so!

Six going to post here but there will be many a long face if CONSITUTION HILL fails to follow up his brilliant win 35 days ago. The turn of foot he showed was superb and that put him at the head of the Supreme Novices’ market until his stable companion JONBON came out again and hacked up like a superstar.

Nicky Henderson is the master at getting this type of horse ready for this type of race and he’s long odds on already to win on Saturday.

I’d not have a bet here but if anyone fancies buying some money, it’s CONSTITUTION HILL you want to be investing in.

Only one previous running of this and that went to the odds-on Olly Murphy trained favourite. I’ve no tissue right now but if I did have one, I’d expect CRYSTAL GLORY to be in a very similar mould.

James Ewart runs two here, both racing second time following a wind-op, both maidens, and who knows what difference, if any, that will make?

I expect CRYSTAL GLORY to open favourite, probably odds on, and win.

Head in hands and my brain hurts now, too!

A 12 runner Class 4 Novice event that has only been run twice previously and was last year won by a 25/1 shot. The first running of this race went to a 5/1 shot trained by Tim Easterby and neither winner has done absolutely anything since, so winning this might be akin to taking home a ball and chain.

What wins it? Wish I had a De Lorean right now, fast forward to Sunday, get a copy of a newspaper to check Saturday’s results….because that’s the only way I’d have a clue….might still get it wrong!

I’d have probably said the same about that rat he won with last year, who arrived with form figures reading 8/7, 8….very similar to those of GOAST DANCER, whose are 06-08.

SEAN – SINCE DAY ONE

Eight previous running’s of this race and if you want the winner, do not look outside the front two on the tissue….only one of those eight previous winners were….and that went off the third favourite.

Paul Nicholls targets this race. He has run eight in it, won with three, placed with three and he saddles the horse most likely to go off favourite, FLEMENSTIDE, who bolted up on hurdling debut, ridden by the pilot on board this Saturday, Bryony Frost.

He beat the odds-on JAZZ KING that day (beaten at odds on again since), easily, despite running as green as grass and with that experience under his belt, and with his yard also hot as Hades (another with a 61% RTF%age figure), I’ll plump for him…straight on the nose.

We finish with an all-weather doodah at Kempton, just five heading to post and just six previous running’s to draw on for a trend.

The only qualifier on what are tenuous trends to say the least, is EDRAAK.

Tom Marquand rides for Mick Appleby, the horse is the only previous course winner in the field, won 31 days ago, so is fit.

The danger on trainer stats would be FIVETHOUSANDTOONE as Andrew Balding has saddled four for this, won with one, placed with one but, as I say, it’s all purely based on limited information, given how I work a race.

Previous Bryony Frost and the price of a hot dog!
Next Low sun, frozen tracks, 12 races this weekend discussed and all the winners free to access!

This weeks Podcast looks at the fallout from the Bryony Frost case, whether racing is …